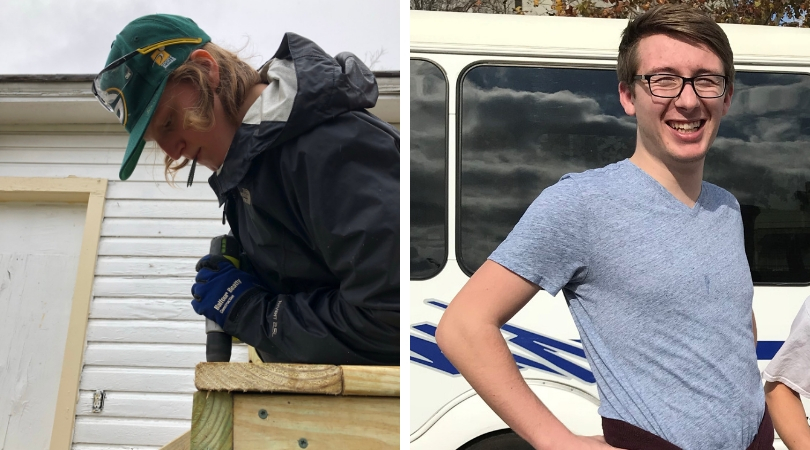 In January 2019 thirteen folks from Pres House traveled to San Antonio, Texas for a week-long Break With A Purpose. They met migrants seeking asylum and learned about immigration at the southern border. Seven participants shared reflections in worship on Sunday 1/27 and on this blog. You can link to all their reflections via this post. Two of their reflections are below. You can also listen to these same reflections here.

The Victims of Migration
By Clare Aeschbacher

Drug dealers, rapists, illegal aliens, criminals. These are just a few of the words the president uses to describe asylum seeking refugees in the United States. These are not the people we met in San Antonio. Instead, we met mothers, fathers, and children fleeing from the lethal violence they face on a day to day basis in their countries, trying to save their own lives and the lives of their family members. Most refugees that come through Mexico to the U.S. originally come from Guatemala, Honduras, and El Salvador where almost 60% of the population lives in poverty, with few opportunities for economic growth, and the homicide rate is three times higher than in other Central American countries. Many victims from these countries leave for fear of violence and that their children will end up joining gangs to survive.

Though the refugees we met had been through hell just trying to get into the U.S., they continued on their journey to create better lives. One day, Becca, Emily, Jessica, and I went to the airport to greet migrants, fresh out of a detention center, and help them get checked in and ready for their flights to various cities across the U.S.. Along with an airport volunteer, I helped a woman exchange her currency for U.S. dollars and use a vending machine to buy snacks for her children before their flight. Though she only had around $100 and the clothes on her back, she was kind enough to offer me a drink from the vending machine. Later in the day, she and the other mothers watched their children and smiled at the simple, yet comforting, sight of them playing and laughing. They were doing everything to protect their precious children from the dangers they faced in their home countries including violence, crime, and corrupt governments. These women showed so much strength and love so fiercely. The next day, I met a proud mother whose daughter impressed us with her knowledge of all of the state capitals and her intellect in other ways. My teammates witnessed the strength, resiliency, love, and intelligence of these same people I talk about today, and dozens more during our week in San Antonio. We did not meet criminals; we met parents, children, friends, humans.

The Journey
by Steven Martell

Once the victims identified by Clare make the decision to leave their homes, they are faced with some of the questions posed in today’s 2+ discuss: “Where will I go?”, “How will I get there?” and “How will things go once I make it to my destination?”

Although it is not the most preferred option, many people choose to flee into the neighboring countries of Belize, Costa Rica, Mexico, Nicaragua and Panama where communities are significantly safer. However, many have decided to take greater risks by fleeing further to more well-developed countries such as the US or Canada where financial prospects are better, as many of us have become aware over the past several years.

To make the arduous journey to the United States, refugees must travel up to 2,500 miles to get to the US border. First, many families are faced with the decision of whether or not to travel with a “coyote”, a smuggler who promises to guide families on safe routes across Mexico to America. Those who choose to travel with these guides run the risks of being connected to the sophisticated networks of crime in a new country, and they often must pay exorbitant amounts for the guidance, which can cost years of saving as well as the sale of personal property. Those who choose to travel without the guidance of a coyote are subjected to thousands of miles of travel on their own. This often leads individuals and families to combine forces with others as they form caravans in desire of ensuring strength in numbers. Still others are left making the voyage on their own.

Regardless of the group with which one travels, or the mode of travel used, the journey is physically and emotionally taxing. First, asylum seekers must find a way past the southern border blockade, which arrested and detained over 400,000 migrants over the two year period between 2014 and 2016. Once in Mexico, many people travel by foot or motor vehicles, while most others choose the faster (but more dangerous) train route. Journeys by either method can take weeks or even months, and present travelers with remarkable challenges. In traveling through diverse, unforgiving biomes ranging from jungle to desert, many people give up and turn themselves in to Mexican immigration officials due to disease, extreme fatigue, hunger or dehydration. Some have horrific or fatal encounters with gangs, common criminals and corrupt law enforcement. While the train route known as “La Bestia” (“The Beast”) presents the challenges such as falling off the train (and onto the tracks), being attacked by gangs, and an increased risk of deportation, traveling by land offers the challenge of walking for days on end in diverse terrains. The final option is the maritime route which has become appealing as the attention of immigration officials is focused on the land and train routes; however, this option runs the increased risk of dangerous encounters with drug trafficking criminals that have learned that this route is safer for their illegal trade.

After making this journey through Mexico, asylum seekers arrive at the US border. Most immigrants have been instructed to cross the border and wait to flag down border patrol agents when they get to the US, so they can request assistance. After 24 hours in “The Ice Box”, a cold room with no access to food or water where migrants are monitored for infectious diseases, asylum paperwork is started with immigration officials, and families and individuals are given court dates for 6 months to 2 years in the future. Next, immigration enforcement determines whether they will release the migrants onto the street or send them to detention centers. Although family detainment is not required by US law, the number of family detention beds increased from 85 to over 3,600 following legislation passed by the Obama administration and expanded by the Trump administration. After passing a credible fear interview in the facilities, where asylum seekers must prove a reasonable cause for fleeing their homelands, those being detained spend a 21 day holding period working with officials employed at these for-profit facilities to reconnect with family members or friends already in America. After this is over, they are released from the facilities, so they can travel their separate ways, the stage during which our group interacted with the migrants, as will be discussed later by Becca.

One group of families we had the opportunity to interact with during our work had just finished making this trek from Honduras to the US border as we arrived to San Antonio. These families had previously lived in African-Honduran communities, but having faced threats that were heightened by their minority status, chose to flee with their young children. The three families left different communities around the country and met each other along the way, and they decided to travel together until reaching America. Because of their personal situations, they felt that their odds of success would be maximized by taking the train route, so they traveled a majority of the journey hopping trains carrying infants and small children. When they reached America, the three families were detained for the 24 hour period in the Ice Box before being beginning the Asylum seekers paperwork and being released. We came across these families on Monday night, and invited them to La Casa, which will be further discussed by Erik and Emily in a moment.

To learn about the details of this crisis was moving, as it allowed me to gain a much deeper insight to the lives and journeys of those coming across our southern border; it brought the heated political debate to life for me. Although I had done some research on this topic in the past, I mostly considered the journey once people reached the US-Mexico border and had entered America, but considering the entirety of the journey made it clear that it is only one relatively short stage in a months long exodus from conflict-stricken lands. Having played the small role in their journey of being a smiling face at a bus station and at La Casa made me realize that although we can’t solve such a sizable crisis on our own, we can help in small, everyday ways to make a meaningful impact. It is in situations such as these where we are most challenged to live a central message of our religion: “Love your neighbor as yourself.”

"Look at the birds of the air; they do not sow or reap or store…

Finding Myself Among Friends ~ Steven Chapman

About 8 years ago, including most of college before starting grad school here at UW,…

Oh. My. Gosh. I did not expect to get here. Three weeks ago, I was…