There are so many ways to get involved at Pres House: weekly gatherings, Sunday worship, events, retreats, trips, the study lounge, and more.

Here are some easy ways to stay up to speed on what’s happening in the community:

Looking for a place to study or hang out between classes? Our lounge is open Monday – Friday, 10 am – 5 pm. There are plenty of tables, plus cozy couches and free coffee, tea, and snacks. Students are also welcome to use the kitchen to fill water bottles and heat up food — or search the fridge for leftovers from Sunday dinner! 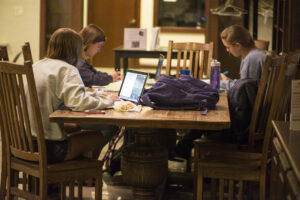 Want to connect with a pastor? Click their photo!

Erica has served Pres House since 2004. She is a second-generation Taiwanese-American who grew up in the San Francisco Bay…

Erica has served Pres House since 2004. She is a second-generation Taiwanese-American who grew up in the San Francisco Bay Area of California. She lives in Madison with her partner, Mark, and their two daughters. Erica has a B.A. in Mass Communications from UC Berkeley, a Master of Divinity from Princeton Theological Seminary, and is an ordained minister in the Presbyterian Church, U.S.A. Some of her favorite spiritual disciplines include practicing the martial art taekwondo and Sabbath.

Until I entered college, I thought Christianity was mythology and that Christians were weak-minded people. But I ended up sharing my dorm room with a Christian and to my surprise, we became friends. During that year, I was challenged to examine what I believed about life and community. What I discovered was that the love and power of God bring radical transformation within people and the world. God’s call for our lives goes way beyond what we can imagine–it’s much riskier, bolder, and more fulfilling than the plans we make.

There are many ‘dividing walls of hostility’ we put up between each other–race, class, sexual orientation, gender, politics, and religion, just to name a few. I believe strongly in Jesus’ vision where all people are reconciled to God and one another. I invite you to enter into this community, not to find people who are just like you, but to live out the commandment to love God and ALL your neighbors, which means practicing what I call ‘holy friction.’ I hope you will engage in that journey with the community at Pres House.

Nii Addo is a second-generation Ghanaian immigrant who spent most of his life in southwest Missouri. He has an M.A.…

Nii Addo is a second-generation Ghanaian immigrant who spent most of his life in southwest Missouri. He has an M.A. in Religious Studies from Missouri State University and a Master of Divinity from Princeton Theological Seminary. Nii Addo has a deep passion for the Star Wars universe (pre- and post-Disney) and is an avid, albeit sad, supporter of Manchester United Football Club. He also appreciates a high-quality donut, especially after a long bike ride.

I grew up in a deeply faithful household and was nurtured in my faith by my parents, my brother, youth pastors, and mentors. But I’ve always been the inquisitive sort. As I got older, I started to probe the boundaries of my faith tradition. Throughout my years in college and seminary, I began to see that God was not who I thought God was. I began to see how God is not bound by our expectations, how God in Christ ‘overturns every notion of propriety to be with us,’ and how God’s Spirit disrupts the status quo and beckons us out toward new horizons.

I believe that relationships are at the center of what it means to be God’s people. In my role at Pres House, I hope to find new ways to welcome folks into deeper relationships with God and with their neighbors. This community is a place where we can learn how all of our stories—as unique and diverse as they are—intersect with God’s story, and I consider it a privilege to be a part of that journey!