Pres House wishes to acknowledge its buildings sit on the traditional, ancestral homelands of the Ho-Chunk people and honor the long heritage and living legacy of Native Americans here in the Madison (Four Lakes) area.

To learn more about each period in Pres House history, just click or tap the section you're interested in.

At the start of the twentieth century, the Wisconsin Synod of the Presbyterian Church began hearing concerns that with the rise of public, land-grant universities, students were being drawn away from church-sponsored institutions and were losing their religious connections when they left home to pursue their education.

A “Presbyterian Student Union for mutual acquaintance and spiritual culture” was organized, and Pastor George E. Hunt of Christ Presbyterian Church in Madison received permission to hire a staff person to serve college students. In 1907 Matthew C. Allison, pastor of the First Presbyterian Church of Bloomington, Indiana, accepted the call to begin working with students at the University of Wisconsin.

From 1907 to 1920 Allison traveled the state educating churches in Wisconsin on the need for mission work among university students. In Madison, he built relationships with students and invited them to attend Christ Presbyterian Church, two miles from the campus. There he taught Bible classes and gave lectures on Sunday evenings. In the first five years, more than 500 students became members of Christ Church and eight students became candidates for the ministry.

In 1912 the Wisconsin Synod, with the help of the College Board (a unit of the Presbyterian Church’s General Assembly), assumed the full support of the university pastor. In 1914, Christ Presbyterian Church burned and the United States entered the First World War, two events that prompted the idea of finding space near the campus to house a student ministry. At a Synod meeting in late 1918, members recognized that a “university mission [would] have to be housed near the campus.” In 1920 a land contract was signed for property on the corner of State and Murray Streets.

The next decade was devoted to building a campus ministry, both figuratively and literally, and raising the funds to sustain it. A student group began to meet in the new location—a large, rambling house—and fundraising efforts began to pay off the loan. Student fellowship flourished, and by 1930 the ministry had outgrown “Pres House” (as the students dubbed the facility). Demands for a larger building, with a chapel, grew more insistent.

Although slowed by the Great Depression when numerous donors reneged on their pledges, the fundraising ultimately proved successful—first to pay off the land contract and then to provide for a needed chapel and “clubhouse.” The Wisconsin Synod created a new corporation known as “The Presbyterian Student Center Foundation” with the mission of managing both the ministry and the building program. 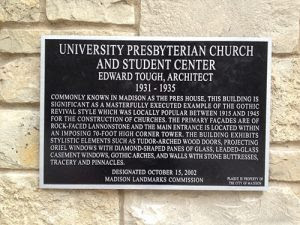 In the summer of 1931 workers removed the old residence from the property at 731 State Street, and the new church structure slowly rose. Pastor Allison suffered a stroke, and in 1935 he died without seeing the project completed. The legacy of his considerable influence in fundraising, including securing a generous bequest from Carroll University (the Presbyterian college near Milwaukee; formerly Carroll College) and much personal financial sacrifice from board members, allowed for the mortgage to be paid off by 1940. The ministry grew during this decade, characterized by worship activities, “cost” suppers, music programs, and ten-cent Friday night parties.

During the 1940s Pres House established its unique character among Presbyterian student campus ministries throughout the nation. No longer content with traditional weekday and Sunday evening programs and services, Sunday morning worship became the occasion for primary faith exploration. Pearl Harbor and the entry of the United States into World War II interrupted the education of many students at the university, but with the end of the war and the return of many veterans to college life, the congregation mushroomed. At one point in the early 1950s, several hundred parishioners worshipped in each of several services every Sunday. Alumni from those years speak of standing in waiting lines that snaked down the steps and out onto the sidewalk.

In addition to its vibrant worshipping community, Pres House was also a gathering place where students came to socialize, sing, and study. Choir practices, card games, parties, concerts, and colloquia took place in the chapel and in the lounges. The building was full and busy every day of the week. A number of students also lived in the rooms at Pres House. Called ROOJAHs (the Royal Order of Janitors and Hosts), these residents cared for the building in exchange for board. They cleared the sidewalks in winter, mopped floors, cleaned bathrooms, and shoveled coal into the boiler, among other tasks.

Although the building at 731 State Street officially became “University Presbyterian Church,” it never lost its “Pres House” nickname or its sense of history. The Presbyterian ministry was able to provide a vital church experience that was directly related to the needs and concerns of Christian and non-Christian students alike across the university campus.

In 1962 a national movement to merge mainline Protestant campus ministries occurred. Three denominations—United Presbyterian, United Church of Christ, and Disciples of Christ—combined. Although Pres House had long been directly identified as the mission for higher education within the Synod of Wisconsin, a new ecumenical body, the UCCF, came into being, serving both as a policy-making and funding agency for campus ministry.

By the middle 1960s, with civil rights protests and the Vietnam War occupying the hearts and minds of students, violence increased on campus, and lower State Street became an area of unrest. Many university students became involved in the protests to one degree or another, and at the height of the anti-war demonstrations, Pres House served both as an escape from tear gas and turmoil and as a center for discussions on faith and politics, society, and institutions.

Pressures for ecumenical work in Madison increased. Mainline campus ministries requested more funding at the same time that denominational funds for missions began to decrease. Two services continued each Sunday in the chapel throughout the mid-1960s, but by the end of the decade, many students had become disillusioned with institutions, including the church, and were focusing their efforts elsewhere. Membership declined, and in 1969 the Presbyterian Synod dissolved what had been a unique university congregation.

With the dissolution of University Presbyterian Church, the Pres House Board, along with the boards of directors of the Baptist Student Center, the Wesley Foundation of Wisconsin, and the United Church of Christ, began a new venture—Madison Campus Ministry. MCM, as it became known, carried on the work that the various centers had been involved in on the campus, and gradually it began to integrate new programs and put into place a new set of goals for campus ministry in Madison.

A number of campus pastors were employed during this period and active ministry took place at Pres House, primarily in the form of counseling, service projects, education, and spiritual formation, but in some years also included a small mid-week and Sunday worship service. In 1983 a Christian Reformed congregation began to rent space both for offices and for worship in the chapel on Sundays. A Christian coffee house called the “Catacombs” was organized and run by students on the lower level where music, food, and cultural events were offered to the campus community. The function of Pres House as it approached the end of the 1990s could be characterized as largely that of hospitality—renting space to various Christian and nonprofit organizations, hosting weddings, parties, concerts, and receptions.

In 1999 the Presbyterian Synod announced its intention to sell the property, but with committed students, pastors, local church members, and others defending the need to retain Pres House for campus ministry, Synod officials relented.

Concerned over the near-loss of the property and encouraged by the Synod, the Presbyterian Student Center Foundation Board took on a new mission for Pres House. The board hired staff in 2004 to renew the Presbyterian student ministry, raise funds to refurbish the lovely church building, and develop the property on the vacant lot facing Murray Street (now East Campus Mall) as a student residence. The new co-pastors, Erica Liu and Mark Elsdon, in the spirit of the founders of Pres House, began rebuilding a community where students would come to socialize, study, seek answers to big questions, explore spiritual issues, and worship God.

In 2004, Pres House ministry was on life support: no students, an old chapel building in disrepair, a pot-holed parking lot, one staff member, and less than $10,000 per year in annual donations. Fast forward to 2014: by God’s grace, the Board of Directors, students, alumni, donors, and staff have worked to build a vibrant and comprehensive campus ministry—student by student and brick by brick.

Each year our community has grown as Pres House launched a Sunday worship service, developed student leadership structures, facilitated small groups, organized service trips, hosted spiritual retreats, created an internship program, and nurtured people in the community to devote themselves to following Christ. Today Pres House reaches more than 400 students annually through the PH Apartments and the campus church community. The annual operating budget of Pres House has grown from $160,000 in 2004 to $2.2 million today. The historic chapel building was completely renovated and restored and the parking lot became a beautiful seven-story apartment community for students in 2007.