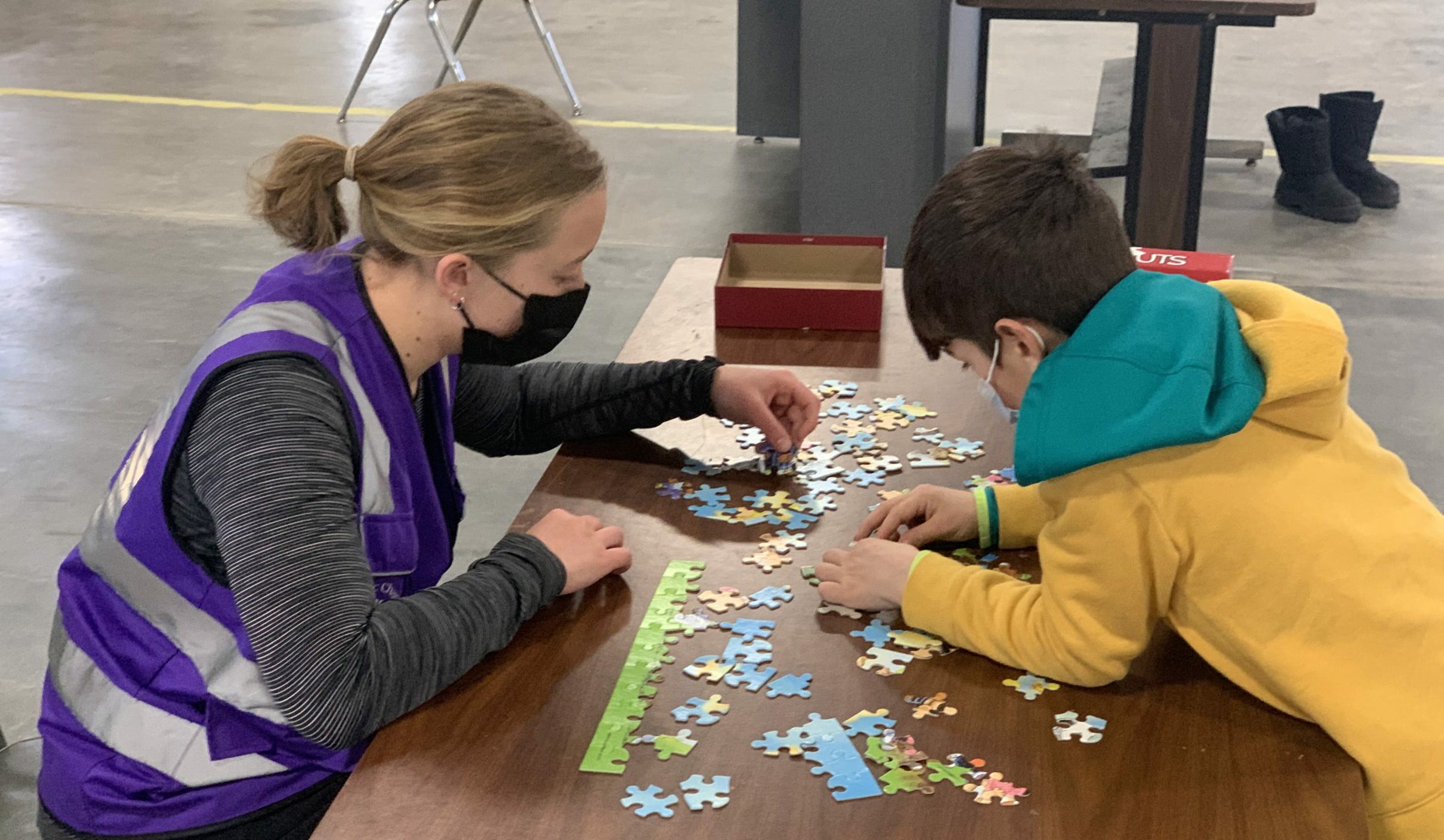 When we were sent off to the centers we worked in each day, we were given tasks to do and rules to follow.  Sometimes we were busy running around our centers and could barely contain the chaos, but at other times the centers were quieter without much to do. During the quieter times, many of us spent time thinking about the things we had seen, heard, and experienced while we were at Fort McCoy.

While we were there, I experienced a lot of joy, especially from the kids we worked with, but at times I also felt overwhelmed and powerless. I felt like nothing that I said or did could help make the situation better. As a group, our thoughts and reflections led to many questions without answers. One thing our group was wondering was how to maintain a balance of enforcing the rules that the centers had in place with the empathy that we felt for the people we were working with. Each center had some restrictions in place. For instance, in the sewing center, each person got a limited amount of fabric, and in the childrens’ centers, kids were supposed to leave all of the toys and craft materials there.

Beyond Fort McCoy, we also wondered about the futures of the people we were working with. We had many questions about the resettlement process, especially concerning what supports would be there for them when they arrived in their new homes. I felt like connecting with our group from Pres House each night was really what helped me to think constructively about the questions I had and reflect on our collective experience. We were able to share moments from our days and emotions that we were feeling. We shared in both the good moments and the times when we felt frustrated or overwhelmed. This made the experience much more meaningful because we all have such unique perspectives that we were able to share in discussion.

One night when we were together talking about our day, Olivia asked a question that I think resonated with all of us. She simply asked what we were doing there in the midst of everything going on around us. For me, once the question was asked, it became something that I was constantly thinking about. I still don’t have a definitive answer by any means, and I am still grappling with the question of what our role there was and the tension between rules and hospitality, but I do think that there were some important things that we did there.

One important thing was just being with the people there. It sounds basic, but when I was in the women’s and children’s centers, a lot of the time I spent there consisted of doing puzzles and playing games with the kids. For that small amount of time, I was able to give my attention to them and do normal kid things with them. One day I was smacked in the face with a ball and it turned into an impromptu volleyball game with a girl who I then spent the rest of the morning with. In another instance, I spent almost the entire day with a boy as he dragged me from one activity to the next. It’s hard to articulate, but moments like this felt like I was finally doing something good even if it was just providing a small distraction from a terrible situation. In doing this, we were able to try to make people feel heard and seen, even if we couldn’t possibly imagine some of the things that they have gone through.

In being there, we were bearing witness to this moment in history firsthand. This was something that Erica mentioned during one of our devotionals and it has really stuck with me. I think that it is so important that we bear witness to moments like these so that they are not just another news headline. It is important that we recognize and embrace our shared humanity and if nothing else, we were able to be there for people in small ways in a messy, complicated situation.

Lauren Pettis shared this reflection on Sunday, January 30, 2022. You can watch it online here.

"Look at the birds of the air; they do not sow or reap or store…

Finding Myself Among Friends ~ Steven Chapman

About 8 years ago, including most of college before starting grad school here at UW,…

Oh. My. Gosh. I did not expect to get here. Three weeks ago, I was…