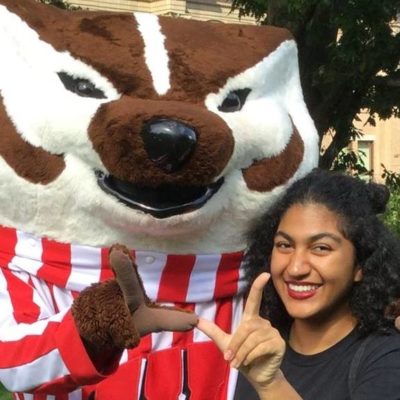 Shaniya Auxier is a second year student. She shared this story at Sunday Worship on September 15th, 2019. You can also listen to it here.

Hey, y’all! I’m Shaniya, a second year studying Psychology with a certificate in Gender and Women’s studies, if you didn’t know, and I am delighted to share my coming to Pres House story with you.

Unlike some others that I’ve met, I did not find Pres House right away. After Convocation, I came to Frunch, hopefully like many of you, and when I left, I didn’t step on Pres House property again until that October. The truth is, I wanted to be apart of a spiritual community; I wanted to find a church home on campus, but I was terrified. My family identifies as Christian, but doesn’t really practice or attend church, and when we did, all I had were negative experiences. So it was safe to say that I was open to the idea of church, but had no idea what I was doing.

Fast forward a bit, and little old me was sitting in a club meeting, still with no church home. I was receiving weekly updates from a place on the corner of East Campus and State—I supposed they had gotten my email address from Frunch—but I never had the courage to actually stop by. A friend in the club was sharing about an experience where they had been discriminated against at another church. Set alight by fury, I talked to them about the emails I had been getting from Pres House and how accepting they presented themselves to be. Throughout the night, I had managed to convince my friend to check out Pres House’s freshmen small group with me, hoping to write over how wronged they had been and convince them to give religion just one more try. We came late, which would prove to be very on-brand for me, but Erica welcomed us all the same. By the end of the night, my friend had begun a healing process that they would take with them outside of Pres, but I knew that I would stay.

In the concluding moments of my first Freshmen small group, there was a feeling deep in my chest and I just knew that this was it—Pres House was the spiritual home I had been wanting. That is, until I realized that I couldn’t keep avoiding worship on Sundays, because, as Jacob said last week, Erica is pretty difficult to say no to. Eventually I was able to bite the bullet and show up to worship, but Pres House made sure I was never alone. It had been a long time since I had been to a church service, but Pres House met me where I was and made me feel included. No matter what preconceived notions I had about church, no matter how far behind I thought I was, no matter what non-traditional beliefs I held, Pres House has been here with me, helping and guiding me on my now richer and more fulfilling religious journey.

This week’s “Questions Jesus Asked” question is “What are you looking for” and for a long time I was searching for someone to walk in my faith with. I had grown accustomed to practicing my religion alone, and, if necessary, that is perfectly okay, but here at Pres House, there is an entire community of people who just want to be here with you on your journey, wherever that may be, and I’m blessed to have found them.

“What I Wish I Knew” – Advice for New Graduate Students

Hope is Named – A Reflection from BWAP Louisiana

A Reflection from BWAP Louisiana by Mary Murphy Hope is Named. As I reflected upon…