Being Christian in Public - Pres House skip to Main Content

If we want to follow Jesus the Messiah, then we have to recognize that his entrance into the world was about challenging the systemic brutality and oppression of an empire that trod on the weak, marginalized, and powerless…It necessarily means that we must address the way white supremacy has become normalized by our governmental leaders and also in many of the institutions we are a part of; we cannot look at how the threat of violence, imprisonment, and the stripping of rights is regularly used as a tool by those in power primarily against brown and black people and not be reminded of first century Jewish peasants living under the rule of Rome; and we must recognize that the Christian leaders who claim defying President Trump is defying God are taking a page from an ancient playbook that dates back thousands of years to when the Emperor was assigned divine status so as to justify whatever he wanted to do… 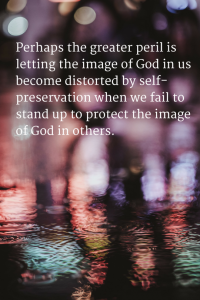 What has been going on right now is not new, it is ancient history being repeated, from the terror inflicted upon the Jews in first century Israel by the Romans, and then again in the 20th century in Europe by the Nazi Party in Germany, to today in the United States where the seeds of injustice that were sown at the inception of our nation are bearing a whole lot of rotten fruit as people on the margins are persecuted in the name of “law and order” by leaders who lie and make false equivalencies between people who resist hate and those perpetuating it. The signs could not be more clear that evil, hatred, and injustice are having their way right now as undocumented immigrants, LGBT people, Muslims, and communities of color daily face terror at the hands of those in power even as everyone faces the real existential threat from world leaders who think you can play chicken with nuclear weapons. It is only going to get worse which is why I think Jesus is persistently asking each of us, “Who do you say that I am?”

To answer, “You are the Messiah” means inviting risk and danger into our lives—after all, Jesus did tell the disciples immediately after the revelation that if they wanted to follow him, they had to pick up their crosses too. The truth is, however, is that risk and danger already abounds—perhaps the greater peril is letting the image of God in us become distorted by self-preservation when we fail to stand up to protect the image of God in others. As we enter into another year, all of us are accountable not just to ourselves, but to the people who are under threat and suffering; if you do not personally know of someone that is in peril, then that is a privileged problem that you must work to rectify. History will judge us not just by what we do, but by what we do not do.

“Who do you say that I am?” Jesus is asking us right now if we will go public in our relationship with him. May God’s spirit empower us with the courage to pick up our crosses and move forward in scandalous love.

Here is a brief overview of the Recent Alumni Survey. We have included the top…

Ebenezer Ojo is a junior majoring in Biochemistry. He shared this story during Sunday Worship…